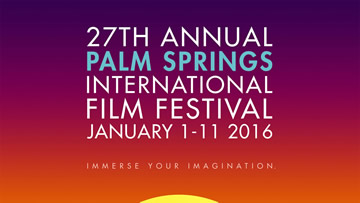 Palm Springs, CA (September 3, 2015) - The Palm Springs International Film Festival (PSIFF) is pleased to announce that former Newsweek film critic David Ansen is joining the festival team as Lead Programmer. Working with a team of six other programmers under the direction of festival Artistic Director, Helen du Toit, Ansen will be responsible for acquiring films for the upcoming festivals from a number of highly-regarded U.S.-based distribution outlets and international sales companies, in addition to being a key member of the selection committee for films submitted to the festival from a wide variety of sources.

"I'm thrilled to have someone with David's vast scope and depth of knowledge about film join us as a key member of the PSIFF programming team," said Festival Director Darryl Macdonald. "His taste in films has always been impeccable, ranging from the discovery of unheralded works from gifted new international directors to a singular appreciation of films from seasoned filmmakers working in the major studio millieux."

"As a longtime fan of the Palm Springs International Film Festival, I'm very excited to be working alongside Darryl and Helen, who have turned it into one of the country's great festivals," said Ansen. "I love its emphasis on international cinema, its broad, eclectic spirit, and the adventurous and enthusiastic audiences. I'm looking forward to contributing all I can to this wonderful cinematic oasis in my favorite desert city."

The Awards Gala of the 27th annual Palm Springs International Film Festival is sponsored by Mercedes-Benz and Entertainment Tonight. The City of Palm Springs is the Title Sponsor of the Film Festival. Presenting Sponsors as of the date of this release are The Desert Sun and Spencer's. Major sponsors include the Agua Caliente Band of Cahuilla Indians, Wessman Development, Bank of America, Wintec, Regal Entertainment Group, Annenberg Foundation Trust at Sunnylands, Windermere Real Estate, Guthy-Renker,VisitGreaterPalmSprings.com, Chihuly and Telefilm Canada.