Presented in Partnership with

The new film will be screened in partnership with UCR Palm Desert.

SIGNATURE MOVE | A new romance with Alma forces Zaynab to confront her relationship with her recently widowed mother who escapes to TV dramas and finding her daughter a husband. In this coming-of-age Muslim melodrama, Zaynab copes by taking up Lucha-style wrestling.

Fawzia Mirza was named a White House "Champion of Change" in Asian American Art & Storytelling, a 3Arts Grant Recipient in Acting, a "Top 10 Creative" by Indiewire magazine, one of Chicago's "Rising Stars" of indie filmmaking, selected as the 2017 3Arts Fellow at the Djerassi Residents Artists Program and was named to Newcity magazine's "Film 50" list. She was named one of "8 Muslims Defying Donald Trump" because of her character "Ayesha Trump" and she was part of the Emmy-nominated and Gotham-Award winning series "Her Story." She performed her one-woman play "Me, My Mom & Sharmila" in Pakistan, sponsored by the US Embassy. Her web series, short films, art installations, stand-up comedy and more has been covered in places like Marie Claire, Jezebel, Al-Jazeera, AV Club, .Mic, Chicago Tribune, Esquire, NBC News, VICE, The LA Times, Red Eye Chicago, Indiewire, DNA India and Newsweek Pakistan. Fawzia was last in palm Springs with her film "THE FIRST SESSION" at ShortFest 2015. 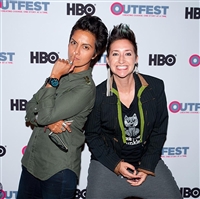 Lisa Donato is a writer, director, and activist from Billings, Montana and based in Austin. Her award-winning work has screened at hundreds of festivals worldwide, including being one of 35 short film directors shortlisted for the prestigious Iris Prize in Cardiff, Wales. Her short film, Spunkle, won the LGBTQ EMERGING FILMMAKER SHOWCASE at Cannes in 2017 and screened at the Palm Springs Short Fest in 2016. Other story and directing credits include shows for National Geographic Wild, Oprah Winfrey Network, PBS, published personal essays in the LA Times, Self Magazine, Curve Magazine, Austin Women, Whole Life Times, 5280 Magazine and multiple other short films and music videos.

Jennifer Reeder constructs personal films about relationships, trauma and coping. Her award-winning narratives are innovative and borrow from a range of forms including after school specials, amateur music videos and magical realism. These films have shown consistently around the world, including the Sundance Film Festival, The Berlin Film Festival, The London Film Festival, The Venice Biennale and The Whitney Biennial. Jennifer was last in Palm Springs with her film "BLOOD BELOW THE SKIN" at ShortFest 2015.